By now, we’ve all seen the headlines about the college bribery scandal. Fabulously rich people allegedly paid more than $25 million to a “college admissions counselor”, William “Rick” Singer, to ensure their kids were accepted into elite schools. In some cases, parents are accused of bribing someone else to take their kid’s SATs. In others, coaches were bribed to give one of their designated athletic admission slots to students who weren’t star athletes, but whose parents could fork over upwards of $400,000 to Singer.

The scandal has sparked important conversations about college admissions and appropriate levels of parental support. When it comes to helping their kids get into college, there is a range of acceptability, from what is expected to dubious to downright illegal.

On the socially acceptable end of the spectrum, parents oversee their kid’s college applications. Those who can afford it pay for expensive test prep courses to boost SAT and ACT scores and bankroll exclusive extracurricular pursuits like travel sports teams or missions trips. These activities may bleed into helicopter parent territory, but they are seen as playing by the rules.

When it comes to buying buildings or making large donations in exchange for special consideration, we’ve unquestionably reached the dubious end of the spectrum of what parents do to give their kids a leg up. While these types of mega donations are still short of breaking the law, it is unsettling to see mediocre students accepted into the most elite schools solely because the building bears their grandfather’s name. It cracks the veneer of America’s supposed meritocracy and leads us to ask if America really is the land where opportunity is real.

Which brings us to the extreme end of the ethical spectrum: outright fraud. The accusations against Lori Loughlin, Felicity Huffman and many other wealthy parents are that they paid inordinate sums of money so their children could reap the benefits of attendance at a prestigious school, lying about their children’s abilities and accomplishments in the process. Because space in a college’s incoming class are limited, every acceptance secured through bribes and trickery not only falsely rewards one student, but also deprives a more deserving student that opportunity.

While we cannot say whether the parents feel they got their money’s worth, we can answer another major outstanding question: is attending an elite school really worth $1.1 million in bribes on top of $264,000 that it costs to attend some of these schools?

The data indicate the answer is a hard no.

What is the Value of Higher Education?

If college is an investment, then assessing the value of a degree can be accomplished by calculating the ROI, or return on investment. To do this, we take into consideration two factors:

The cost of attendance is comprised of tuition and fees, as well as the costs associated with living on-campus. (See our College ROI report for a more complete analysis on this subject.)

The financial benefit of attending college is determined by observing the gain in income received by a college graduate over a high school graduate, known as an earnings differential. However, by choosing to attend college, one is giving up four years of income one could have received if one went straight to work after high school, in addition to taking on the cost of attendance. In light of this consideration, we calculate the earnings differential as the difference between the 20-year pay for a bachelor’s graduate and the 24-year pay for a high school graduate.

To calculate ROI, we divide the 20-year earnings differential for a graduate of a school by the cost of attending that school. Because state-schools have different costs of attendance for in-state and out-of-state students, we calculate two different ROIs, and consequently two different rankings for these schools.

Of all of the schools tangled up in the bribery scandal, the University of Texas at Austin (out-of-state) and the University of San Diego have the lowest ROI. The 20-year ROI for these schools is $440,000 and $354,000, respectively.

These schools are ranked in the top 20 percent but do not come close to the top school on our list: the US Merchant Marine Academy. Graduates of this school reap a 20-year net ROI of $1,094,000. 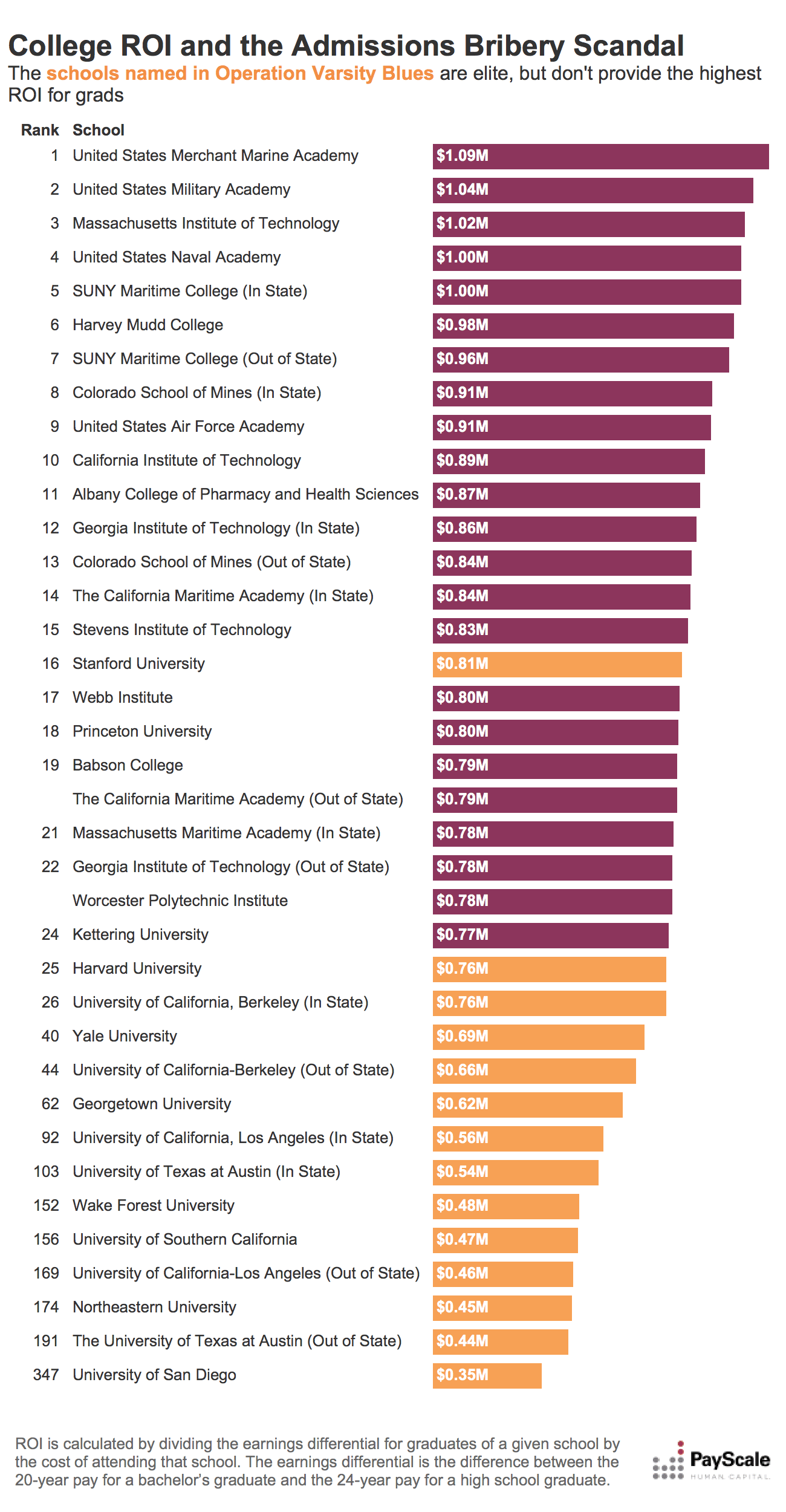 The US Merchant Marine Academy isn’t the only service academy with an ROI of more than $1 million. Graduates of the US Military Academy have a 20-year net ROI of $1,041,000 and those of the US Naval Academy have a 20-year net ROI of $1,004,000. One reason why the ROI for these schools is so large is because, as service academies, the cost of attendance is essentially free. The financial benefit of attending these schools is also large. These highly selective service schools demand academic and physical excellence, as well as military service. As a result, graduates have skills, credentials and experience that are highly valued in the workforce. This all adds up to an impressive lifetime earnings potential.

If we remove service academies, the schools at the top of the ROI list are all elite STEM schools. The Massachusetts Institute of Technology (MIT), Harvey Mudd, the Colorado School of Mines and the California Institute of Technology (Caltech) rank far higher than any of the schools implicated in the academic bribery scandal. The 20-year ROI from attending MIT is $1,015,000, nearly three times higher than the ROI of going to the University of San Diego.

What these numbers make clear is the parents who allegedly bribed their children’s way into college could have gotten more bang for their buck.

Higher Education as a Birkin Bag

Most people, however, recognize bribing a student’s way into a prestigious school is not about securing their financial future. After all, families who have tens or hundreds of thousands of dollars on hand for bribes also have enough money to ensure that their children will have comfortable lives. It would have been relatively inexpensive to take the money used to allegedly pay the bribes and put it in a trust fund that would ensure their children a stream of income. Some of the kids wrapped up in this scandal already had decent economic prospects independent of their parent’s wealth.

The alleged bribery, however, was not investing in education. It was parents buying status for their children. Wealthy, well-connected parents bribing their kid’s way into college underscores that for some, higher education is just another form of conspicuous consumption. For them, a degree from an elite school doesn’t symbolize hard work, intelligence and training so much as status and wealth. Having an Ivy League degree is no different from having the latest Birkin bag or an Instagram profile overflowing with pictures in the world’s trendiest hot spots.

We have reported the top 25 schools by their ROI. A full list of schools, as well as more information on each school can be found at https://www.payscale.com/college-roi.

A detailed explanation of the methodology we use to calculate college ROI can be found at https://www.payscale.com/college-roi/methodology.